Scars of a Cultural Wound: Body, Territory and Memory (Ephemeral Installation). From the series Pain is The Life. 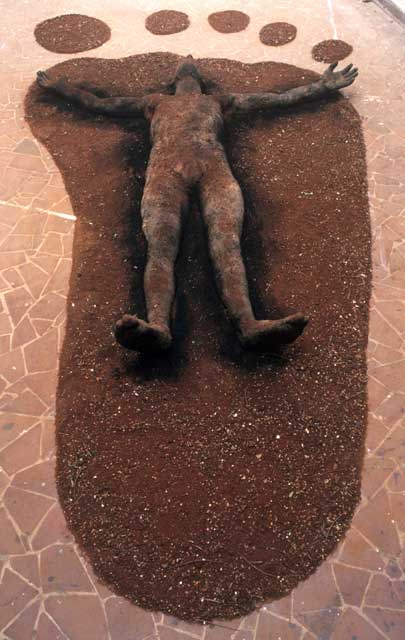 The idea of man as a pilgrim and life as a pilgrimage are common to many traditions of thought, already in agreement with their transcendental character. It is precisely in this perspective in which this work operates that, in the first instance, assumes the phenomenon of existence, as a constant pilgrimage through the paths of the self, an intricate way to oneself. So that, on a first discursive level, man constitutes here his own dwelling, a mystical labyrinth that he must travel through with the exercise of himself in order to stipulate his own interpretative keys… The foot, for its part, assumes the symbolic charge that was attributed to it in periods of primitive Christianity and evokes qualities of the soul, for being what sustains the body in its erect position.

The Scars of the Territory: Memories of a Cultural Wound

In another discursive order, “Terra Incógnita” exhibits the scars of a cultural wound. This work exposes the map or cartography of a territory destined to dialogue with the most recondite self and with the you (Martin Buber). A relational framework that exhibits meditative and labyrinthine inner itineraries and a scar of scission in the always new and unexplored geography that the pilgrim travels in his or her itinerant condition…

Previous post Door of the Spirit (Liminal Threshold) Next post Truth is not a Creed (Paradigms, Utopia and Dogma)
error: Content is protected. Please, share it, do not copy... or write us and ask for the info you need. Thanks
Abrir chat
¿Necesitas ayuda?
WhatApp de Ernesto Benítez
Hola. Soy el artista ¿En qué puedo ayudarte?