On the Way (Pilgrim of the Life)

Philosophy of the Path: The philosopher subject as philosophized object (From the series Pain is The Life) 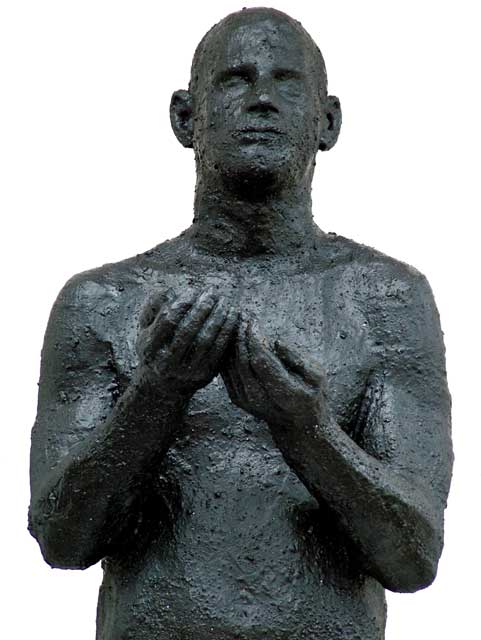 On the Path (Pain is The Life)

A Fissure in the Path: The Pilgrim’s Footprints:

In this work, the path alludes to grades of inner and individual progress in the ascending way that constitutes the ontological development; a path that cannot be traveled before the wayfarer (the pilgrim) becomes the path itself; a path that, when perceived, the wayfarer is already on it… and that place where we go becomes our own and most intimate self.

The Wayfarer, The Pilgrim:

The human figure has been produced through a process of emptying the artist’s own body from bandages agglutinated with an amalgam of resin, ashes and plastered charcoal. It has been constructed following a wrapping procedure that suggests an analogy with its meaning in the Egyptian hieroglyphic system, where the bandages allude both to the first wrapping with which the newborn is received, as well as to the mortise with which the deceased is deposited in his final resting place. In this process only the phase of the negative in the casting is carried out, so that the work exhibits, externally, only a subtle physical resemblance to the model (The artist). The detailed copy of his body is hidden from the viewer because it is found on the inside of the piece along with traces of epithelials, hair and other fluids transferred during its production. The figure’s hands are extended, empty, in an act of offering, but what do they offer? Perhaps their existence; the very fact of be being?