Threshold, Liminality and Rituality in Transition: Exitus-Reditus, Cartography of the Self (Environmental Art) 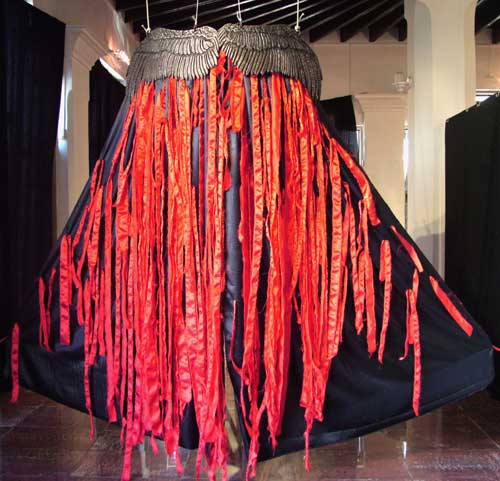 “Curtain of fire” is a metaphor for all material wrapping. It reflects on the processes of perception and on appearances as revelations of the world: outer garments that covers, with visible veils, its own invisibility. In this tessitura, the piece alludes to the illusory wrappings and the rituals of passage. As a symbolic threshold, it is represented in a courtain (metaphorical point of union and separation of the possible worlds); thus, it is constituted as a frame and starting point towards the transition characterized by what is wrapped in the secret.

This work opens or inaugurates the exhibition and arises on the ideas of threshold, preamble or prelude. The passage or “transit” that the spectator experiences while goes through this piece is an allegoric expression that refers to the liminality of the experience in the existential sphere. Thus, this symbolic Rite of Initiation precedes and inaugurates a path ontologically focused towards the development of our spiritual capacities, as a constructive proposal of existence.
Curtain of Fire discusses, in short, action and renewal in the existential ambit. It proposes a vision of the world where the authentic being of the real is not static, but dynamic: becoming. A vision of the world in which the man is a being-in-relation; an ontological not-dual being, but immanently transcendent.
Here the wings enunciate the superior states of the trascendent self and red-black colors refer to the chromatic relationship of fire in hermetic philosophy and alchemy.

Next post The Great Flight (Existence and Transcendence)
error: Content is protected. Please, share it, do not copy... or write us and ask for the info you need. Thanks
Abrir chat
¿Necesitas ayuda?
WhatApp de Ernesto Benítez
Hola. Soy el artista ¿En qué puedo ayudarte?