Liturgy and Rituality in Artistic Praxis (Environmental Art Installation). From the Borderline series 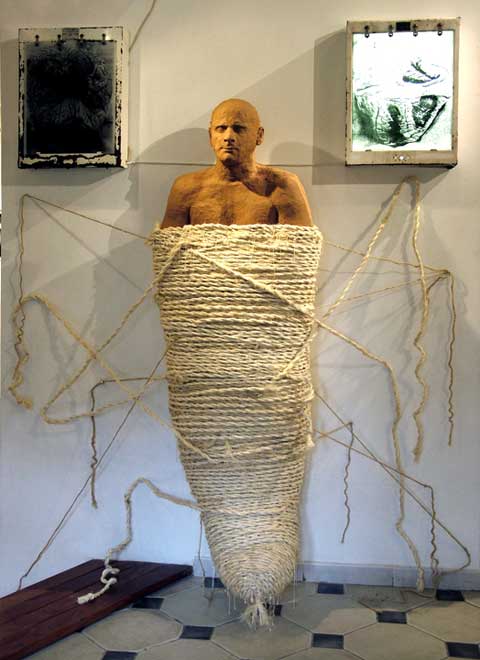 Art-Anthropology: Rituality and Symbolic Analogy (The Liturgy of Art)

“The flapping of a butterfly’s wings can be felt on the other side of the world.”
(Chinese proverb)

In this work, the life-size human figure has been emptied from the artist’s own body with a mixture of bandages and plastered clay. In this particular case, the artist usually carries out a procedure of production analogous to the techniques of Egyptian mummification, where the bandages enunciate a symbolic meaning of double sense to refer both to the first wrapping with which the newborn is received, as well as to the shroud with which the deceased is deposited in his final dwelling.
The figure is made only from a negative mold in the process of casting; so that the faithful copy of the most defined anatomical features -the exact copy of its morphology-, are found inside the created figure, together with its epithelials, some hair and other remains and body fluids (sources of the energy that animate it). On the outside, the figure only denotes a merely suggested approach to its physical resemblance.

In Ernesto Benitez’s rich (multivalent) symbolic and tropological discursive, it is frequent to find cross-signifiers and apparently “opposing” meanings. In the profound symbolism that this work exhibits, there is an evident reference to the metamorphosis of insects (chrysalises?) in a discourse that refers to death and rebirth as exercises in transformation, mutation, change, but it is not explicit whether the figure is wrapping itself or emerging from the cocoon, which, in addition, incorporates elements that refer to the universe of the Kafkaesque ungeziefer (vermin), the alter ego of the chrysalis.
Is the artist presenting us in this work his own image in veiled reminiscence of twilight lepidoptera (Heteroceros) and their association with death and with the darker side of the psyche (bad omen airs included)?