Between Pain, Tedium and Boredom: Suspended Fire, Pending Heart (Ephemeral Installation). From the series Pain is The Life. 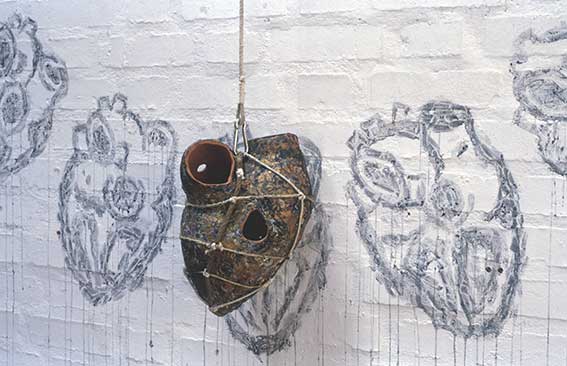 Memory and Oblivion: Vertigo of Succession

“Life swings like a pendulum backward and forward between pain and boredom.”
Arthur Schopenhauer
(The world as will and representation)

Circumstances (ashes of the dreamed man) Fire (vertigo of succession ad infinitum). Days and Nights, systole-diastole, memory and oblivion; concatenation, tension, alternation and resonance… that permanent fluctuation of life as an impulse; as rosary beads. Resonance in the empty extremes of nonmeaning.

“Our conscience is continuously passing from one state to another, and that is the time: succession.”
Jorge Luis Borges

Here man, summarized in the metaphor of the heart (slope, suspended between heaven and earth) has been realized from a terracotta pottery. Accidentally broken and later repaired, it exhibits the historic eloquence of its scars in open reference to the Kintsugi (Kintsukuroi) philosophy. Thus, the scar, as a trace, as remains of the wound in the memory, detritus of the loss and reminiscence of the trauma.

Previous post Truth is not a Creed (Paradigms, Utopia and Dogma) Next post Only Me in my Destiny (Of Shaman and Ánthrōpos)
error: Content is protected. Please, share it, do not copy... or write us and ask for the info you need. Thanks
Abrir chat
¿Necesitas ayuda?
WhatApp de Ernesto Benítez
Hola. Soy el artista ¿En qué puedo ayudarte?